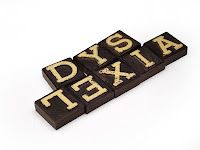 I was 7 yrs old when I first realized I wasn't like my peers, from an education standpoint. My 2nd grade teacher made everyone get up in front of the classroom to read a report on our favorite president.
When it was my turn to read my report, I smiled my toothless grin and spit in my hand to slick my cowlick down and straightened my dress; that wasn't quite long enough to cover my scraped up knees.
"A-hem" I coughed to get the attention focused onto me. I remember looking up at everyone looking back at me. My chubby knees knocking together as I began to read my report on President Reagan.
"President Reagan is my favorite President, 'cuz he likes jelly beans!" I heard everyone giggle, I giggled to when I saw my teacher put her head in her hands.
The report took me forever to read...I looked down at my scribbly handwriting and the letters and words looked all mixed up. 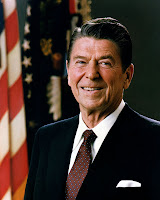 The kids in my class were getting really restless, and I was becoming more and more frustrated...not understanding why I couldn't read the letters and words on my paper. "R's" looked like "H's" and the words were jumping all over the place.
My teacher eventually got tired of what she called "Silly nonsense" and sent me back to my seat. "You can do a PROPER report this weekend Kristi!"
My report WAS really good...I mean who could beat a president who LOVES jelly beans just like I did?
It took me until I was in high school to be FINALLY diagnosed with dyslexia....But by that time, I had gotten by with little tricks I would use to get myself out of reading aloud...(forgetting my glasses, sore throat, etc)
But as an adult with Dyslexia, I find myself feeling really "clumsy" when I read, or if I am writing things down....It's kinda tough to make sure I double check addresses, recipes, phone numbers...because it's really easy to transpose numbers.
Just one of the fun things in life!
An NIH study estimate that 15 % of Americans are dyslexic.....but as my story goes, some people may go undiagnosed.
Here are some things to watch for...For your child, or maybe even yourself:
How do I know if my child has dyslexia?
If your child has had difficulty learning to read words and spell, she might have dyslexia. Young children with dyslexia typically have difficulty learning the alphabet, rhyming, and dividing words into their sounds. Many parents of students with dyslexia describe their children as bright and eager learners until they encounter instruction in reading. At such time, they often become frustrated and despondent. Sometimes these children are able to memorize enough words to appear as if they are reading. When the number of words they must memorize becomes overwhelming (about third grade), the difficulty with reading becomes apparent. Simply stated, if your child has unusual difficulty pronouncing the words when he/she reads and spelling the words he/she writes (compared to others of the same age), you should consider an assessment for dyslexia.
How can I have my child assessed for dyslexia?
If you think your child may be dyslexic, contact your school principal and explain your concern. Under the Individuals with Disabilities Education Act (IDEA Reauthorization 1997) and Public Law 94-142, the Education for all Handicapped Children Act of 1978, you are entitled to have your child evaluated by the school. Generally, schools provide a basic evaluation, but they do not always make a differential diagnosis for dyslexia. Should you wish to pursue the diagnosis privately, you should seek a qualified evaluator. If you decide to use a private evaluator, ask if this individual is familiar with diagnosing dyslexia and which areas she will be testing. A diagnosis of dyslexia can be made after these areas have been assessed: general ability, word recognition, word attack (sounding out words), spelling, reading comprehension, and written expression. In addition, a comprehensive evaluation will include assessment of oral language skills which affect learning to read and write. In Tennessee, contact the Center for the Study and Treatment of Dyslexia for information on testing your child.
Can a person be dyslexic and have an attention deficit disorder (ADD)?
Yes. Recent research indicates that about 30% of individuals with dyslexia also have an attention deficit disorder (ADD).
Do people with dyslexia see words backwards?
There is some evidence that visual dyslexia affects some people. These people have great difficulty establishing left-to-right order for many confusable letters (b/d) and words (was/saw). Very few may actually be able to read books in the upside-down orientation more efficiently than in the typical orientation. However, most people with visual dyslexia have difficulty coming up with the pronunciation of words wherein clusters of letters are used to spell one sound -- words such as sight, road, slide -- or words containing pairings of letters that might spell different sounds in different words -- words such as limb/climb, eight/ate, through/though/tough, believe/receive. Recently, people with such difficulties have been described as orthographic dyslexics.
What causes dyslexia?
Dyslexia is a consequence of the way a person's brain is organized. Learning to read requires making the association between printed symbols and spoken words and spoken sounds. These associations must become firmly fixed in memory for reading to be fluent. People with dyslexia have great difficulty establishing these associations. The exact cause of the difference in the brain is not known, but recent research and new technology make it possible to identify some of the differences in the brains of people with dyslexia. Also, interviews suggest that dyslexia appears in families across generations. Currently, the search for the possible genetic basis of dyslexia is underway in various locations around the world.
http://dyslexia.mtsu.edu/about/faq.html
There may or may not be a link between NF and Dyslexia. Regardless, the keys to dealing with both are similar - discover it, accept it, educate yourself about it, and take steps to Thrive despite it.