Monsters Under the Bed? 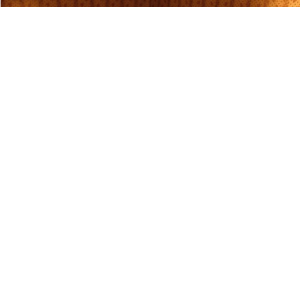 Remember when the "monsters" were under the bed??

When I was 11 years old, living in Newbury Park, CA, there was a killer on the loose who was breaking into homes, late at night and killing its occupants.  The story was all over the nightly news...And I remember police and reporters urging people to lock their windows and doors....

But to me...This was just news.  Nothing was going to happen in OUR neighborhood!

I remember getting dressed, and having cereal for breakfast.  Step-mom pushing us to hurry up so we weren't late for school.

I opened our front door, to a swarm of police cars, fire engines, and 2 ambulances.  I slowly walked out onto my porch and watched a scene I never thought I would ever see.  My very first thought, was that a movie was being filmed....But there were no cameras....No movie crew.

My brothers piled out of the house and stood with me on the porch...Just watching.

There was blood on the front porch of our neighbors house and people running in and out.  My brothers told me that this HAD to be fake and ushered me in to the car.

I went to school that day...Believing that what I saw was INDEED fake.

It wasn't until THAT afternoon when I arrived home....and the police and investigators were still at the house....That I thought something really bad happened.

We were told to stay inside our homes.

That night on the news....The reporter stated that the serial killer had "struck again"...and images of my neighborhood were shown.  I was confused and scared.

I was so scared in fact that I began sleeping under the day bed, with the trundle pulled in beside me, so that I was totally hidden.

How could someone break into peoples homes?  How could someone take the life of someone where they are supposed to feel safe and protected?  I was so scared that this person would come back to our neighborhood and get us too.

We moved away a few months later...

Richard Ramirez was caught and put in jail....I felt a little safer.

With the recent kidnapping and murder of Jessica Ridgeway....I can't help but be extra protective of my children.  It seems the schools are becoming extra protective as well....(which is a good thing)  But where do we draw the line?

My 7 yr old son who is in 2nd grade has come home every single day since Jessica's body was found terrified that THIS is going to happen to him as well.  (My children do not know of the above story, nor do I plan on telling them)

But this is how I found my son sleeping over the last few nights.... 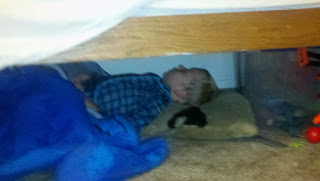 Under his bed, tucked away.  He says, "Teachers say kids can even be taken out of the beds - so when the bad guys break in our house, they won't see me."  This about tore my heart out.

We can educate our kids...WithOUT instilling fear in them. It's important we communicate to our kids the dangers of life, that we as parents do our due diligence and keep them out of harm's way. But it's also important our children feel safe, and not take on the stresses of adulthood before they are ready.

I don't know how long it took me before I stopped sleeping under the bed. One day it just happened. I hope Riker feels safer sooner than I did. It's my job to make sure of that - to ensure he learns not just to survive, but Thrive.
Posted by Kristi at 10:08 AM 2 comments:

We went into Bailey's physical therapy appointment excited.  Hopeful even.  But as Bailey's history unrolled itself in the chart....Those good feelings quickly deflated.

Do you know what's worse than a doctor telling you that
"there's nothing that can be done to help your child?"

Nothing is worse than hearing that. 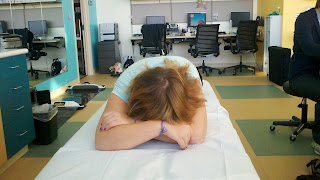 Bailey has Neurofibromatosis.  2 inoperable brain tumors.
A year and a half on chemo...AND Degenerative Disk Disease.

While SOME people with DDD benefit....even IMPROVE with intensive physical therapy, this is not the case for our 16 yr old daughter.  It seems Bailey has a more complicated case of DDD, than first thought....And our therapist tells us that no amount of PT will help Bailey.

But...There ARE some good things that came out of yesterdays appointment.  Bailey has a couple rotated disks, that CAN be improved with PT...And the therapist offered "as much PT as Bailey can handle" to help increase core strength-Which MAY help with the pain Bailey experiences.

So...while it sucks that nothing (right now) can be done for the DDD...We ARE hopeful for the potential answers that may come in the next few months.  We don't give up, and we continue to THRIVE.
Even when  things don't go entirely our way. 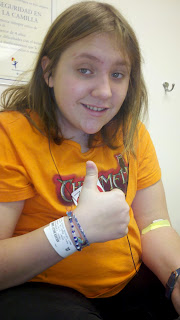 For those that have been asking....An UPDATE on Bailey:

In March 2011, we discovered Bailey had (still has) a very dangerous brain tumor.  She began receiving chemotherapy immediately after this discovery and were confident that the carbo/vincristine combo would halt this tumor's growth....Unfortunately that did not happen.

The tumor went from a regular M&M size, to a peanut M&M size.....After 3 months of treatment.

We then switched to slightly more aggressive chemo (Vinblastine) And Bailey stayed on that for the next 9 months.  We had to play with the dose a little bit, because Bailey showed signs of extreme sensitivity.  (I was told by our Neuro/Oncologist that Chemo sensitivity for kids with NF is VERY common)

This tumor has stayed relatively stable during that 9 months, only changing very slightly--

Our 52 week treatment plan was over....But we still had a brain tumor, that was very much a part of Bailey's life...and it didn't seem to be going away....So we decided to continue on with a newer chemo that Bailey would take orally on a daily basis.

Bailey's port was surgically removed and we were excited to be a part of a select group that was taking this "new" chemotherapy, and hopeful, because its reputation had been really good in treating NF related tumors.

Our "every 3 month MRI" in May showed 'no change' in the size of this tumor.

In August this tumor took a turn.  While still measuring the "same"...the tumor has changed shape.  No one can really tell me what this means exactly...Although I was told that it either means it is getting ready to shrink, or grow.

During the time on Everlimus, Bailey's cholesterol levels have sky-rocketed.  The Drs are keeping a close eye on this, as am I- at home, with diet and exercise-

We get Bailey's blood levels checked once a month and in September the levels indicated the chemo levels were 'too high'......In October, they were 'too low'.

The Drs. decided to increase the dose from 5mg, to 7.5mg and that's when a whole new set of symptoms began.

Our next MRI is in November....Those results will determine what we do next.


We live our lives 'in the moment'...We have no choice--
And when happiness comes---we rejoice!

When hard times hit-as we know they will--
We look to our Father--and stay calm and still. *Kristi Hopkins

My heart just breaks when I hear about these kinds of things.  I have kids (six of them) and I am constantly paranoid about something like this happening to them.  Jessica Ridgeway is your typical 5th grader.  She was on her way to school when life changed forever.

A 3 block walk shouldn't be anything to worry about...Heck, I send my 4 elementary kids (walking about 3 blocks) to school, not even thinking about it....But on THIS day (Friday October 5th) Every parents worst nightmare came true.

Jessica never made it to school....Her short walk to meet friends was interrupted.

Her mother...Who works nights, missed the call from the school, notifying her that Jessica was absent.

I have read comments from those criticizing the school for not doing more....I know it's easy to try to place blame SOMEWHERE...But the school did what ANY school does.  There was NO WAY for the school to know that Jessica was absent for anything more than a doctors appointment.

They left a message, and the day continued on....

Hours went by...And when Jessica's mom got the message from the school, she called the police.

It is now late into day 3 and searchers have found no hints of where Jessica could be.

So what happened?  I play the scenario out in my mind over and over.  Was she lured close to a persons car, who then forced her inside?  Did she go willingly with someone she thought she could trust?

How can parents protect their kids?  Does "Stranger Danger" really work?

I say it only works, if you constantly and consistently help your child understand safe and unsafe situations. I know that when I asked my almost 10 yr old "What is a stranger?"  She responded with, "Someone who is mean and ugly."

"What if a nice looking, friendly person came up to you...and wanted you to go in their car....?"

Confused, my little girl looked at me---

So we had a discussion-- AGAIN, about what a stranger is.

*A Stranger is ANYONE you don't know.
*NEVER and I REPEAT NEVER get into a car with someone, unless Mommy or Daddy specifically say it's ok.
*If a "stranger" comes up to you and starts talking....Find another adult. (We talked about when one on one  - adult to child conversations are ok....like at school, drs appnts, counselors office etc)
It's inappropriate for an adult to ask a child for help...Like finding a "lost" dog, asking for directions, or offering candy if they go for a ride.

Awareness is the key to keeping safe.  The more you talk about what "Stranger Danger" means, the more your child will know the difference between safe and unsafe situations.

I hope and pray that Jessica Ridgeway is found safe....Please keep your children safe and talk to them...Test them...And make sure you know where they are and who they are with....Don't just trust the situation...Take the extra steps to KNOW the situation...