" You don't have to be great to start,
but you have to start to be great. "
ZigZiglar

I just got back from the gym.  My hubby and I are scheduling our work out times, like they are important appointments...And so far, I like it!  We have gotten to the gym (together) more times in the last week...than since we first got our membership almost a year ago!

With all the things going on...THIS is one thing I have complete control over.  I feel my body changing and becoming stronger...Which has had a direct affect on my mood and stamina. 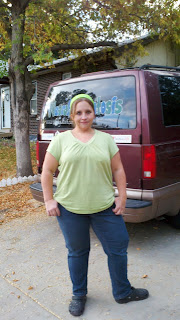 The above pics show me at my heaviest (I still cringe at the number) and Me with a 75 pound loss.  While this loss feels awesome...I have a ways to go...But I have set realistic goals...And plan to stick with them.

When everything else in life feels out of control...THIS is one thing I can do, that makes me feel good.  The healthier I become...The more I can do for my family! 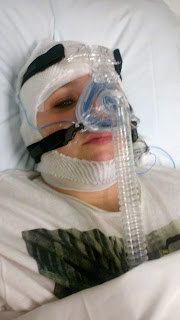 I have the most amazing daughter!  She has gone through...and is currently going through so much...But she has never once complained.  I am so very proud of the young lady she is becoming!

Now - For an update.

I wish that I had better news...Or even just a hint of good.

Yesterday, we met with the Neuro-Oncology team. (Our BIG appnt is next Friday, but we had some medical concerns that needed to be addressed)

Bailey's symptoms along with the fact that her brain tumors don't seem to be going anywhere, prompted a decision to take Bailey off her chemotherapy.

We had a feeling this was coming.  She has been on 4 different types of chemo, over the last 2 yrs...with no break.

The talk on the way to the hospital was how Bailey felt about this possible decision.  SHE was all for it.  Me on the other hand was scared to death to agree to do this....But would never voice this to my 'little girl'.

I hate the hospital.  I especially hate the 7th floor.  We've made that elevator ride a thousand times and the feeling never gets better.  Sometimes, Bailey and I close our eyes and pretend we are taking a ride on a glass elevator...You know...Like the one on Willy Wonka's Chocolate Factory....  WHERE DO YOU WANT TO GO, BAILEY...?

We checked in and waited for us to be called back to the exam room.  I hate waiting rooms too.  My eyes scan the seats that line the room....And stop at the few kids that seem WAY more sick than Bailey...And I start to feel a little guilty.

We are on the Cancer/Blood Disorders floor and as far as OUR "sickness" goes, we are pretty lucky.  I realize that we aren't dealing with the "C" word...But we belong on this floor just as much as the sweet little kids that are running around sporting bald heads....And this often scares me, more than I can say.

We finally make our way back to our room, after getting the routine weight, height and blood pressure check...And again wait.

Bailey and I laugh when we talk about the memories these exam room hold for us.  The last 2 yrs have been CRAZY.!   We have experienced being...SAD...HAPPY...DISAPPOINTED...ANGRY  --If these walls could talk, I am sure they would have the most amazingly emotional stories.

Our small talk was interrupted when the doctors come in.  We haven't seen them in almost 3 months.  It feels like an eternity has passed.

We weren't due to see these Drs, for another week...but this issue that Bailey has been experiencing needed to be addressed.  We talked about how Bailey has been feeling and what the new symptoms were...And the doctor told us that we needed to stop treatment.

I knew this was coming...But it was like I wasn't ready to hear it.  It's different when it's ME talking about this possibility...But hearing Bailey's Drs say it, made me feel sick.

I tried to hard to push these thoughts out my my mind....But I can't help it.

Life holds endless "What ifs..."  And there comes a time, when you just have to do it anyway...Because- you never know, if YOUR "what if" will turn out to be something amazing!

I quietly walked into my two younger girls' room, to kiss them goodnight. I managed to make it in the door, past the closet, when it happened....

The hanger broke and I landed in a pile of Lego’s...Actually think it WAS a castle, that was now crumbled beneath me!

As I steadied myself, I looked around my children's bedroom and realized I have lost all control. For WEEKS I had been telling my girls to clean their room. I'd threaten them with “CLEAN YOUR ROOM OR I'LL THROW EVERYTHING AWAY!”

But they knew that I would never do that.

The next morning...I laid it out. I gave the girls a time limit. “Two hours to get your room clean. If it is not clean, I will go in and bag up the remaining stuff.” They said they understood...and went to work.

An hour went by and I checked on their progress. The girls were making none. Arguing and complaining. I reminded them of what would happen if the job was not done.

(My girls are 10 and 5 and have been shown HOW to clean and put away...they were perfectly capable)

After the two-hour time limit expired....I opened the door to the bedroom, and saw that nothing had been done, from the last check-in point.

I knew that follow-through HAD to happen!

I went into the room with two kitchen sized trash bags and began to put in everything that was on the floor. The contents FILLED both bags. My girls were crying and very upset. To them...life was over.

The TV and computer were probably the most traumatic losses.

My hubby and I held our ground.

When bedtime came around, we sent the girls to their room SURE that there would be some kind of trauma from not having cartoons to watch....But instead....Laughter and excitement came from the emptied room.

I went down to check on what was happening and found my girls playing this game.....My 10 yr old was holding a drawing she made, of a Wii remote...While my 5 yr old was standing being a cut out frame they had made....

“We're playing the Wii Mommy!”   Brooklyn is pretending to be the game, and I'm controlling her...I laughed with them and told them how creative they were.  An hour ago, life was over....And now....They had come up with a creative way to solve their problem.

That's what I love about my kids. Despite all the complications of NF and life with six kids and yada, yada, yada - they remind me to step back, accept the situation, and find a creative way to handle it. To Thrive.

(The girls have been slowly earning back their toys, as long as the room stays clean...And I have been impressed...No stumbling, fumbling, or falling has happened to me since)

Back into the Swing of Things!


The kids went back to school today....YAY!  I love my kids...But MAN, I am happy to have my mornings /afternoons back!  EEeeeEEEERRRRR Screeeeeeeech!  Before I jinx anything, I just want say that I truly did enjoy Christmas Break....I LOVE hanging out with my kids....I just love some quiet, re-coop time as well. :)

I started back at the gym this morning, after I dropped the kids off.  I have been seriously lacking the motivation to go...And I am going to TRY to make it be my goal to go, every morning after the kids are off to school.  (You can hold me accountable if you want)

I also wanted to note that I began a supplement called Bee Propolis.  It was suggested to me, by a good friend and has shown to reduce tumors or stop tumors from starting.  I've done some research on this and it seems to be good for overall health as well.

I plan on also giving it to Bailey-- Her Dr. says it wouldn't hurt anything...And if it helps, than YIPPIE!
Posted by Kristi at 11:29 AM 1 comment:

It's the 3rd of January and we have visited doctors 6 times this year.
All for different reasons and all fairly important....

In the last 3 days, we have learned how to breath with and operate the CPAP, Gone to Urgent Care for a sprained ankle, Orthodontist for a braces check, Ophthalmology visit, Dermatology check-up and ER visit for a broken wrist---WHEW....I'm exhausted!

Three days into the year and I am experiencing let down.
So much medical drama, so much information, so many things to juggle. 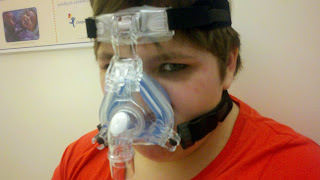 Lessons on how to breath with CpAp 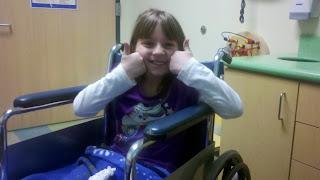 A slip in the kitchen-No Break!  A sprain for Rachel 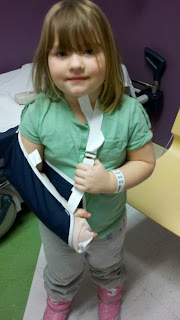 Dancing in the living room-a fall, resulted in a wrist fracture 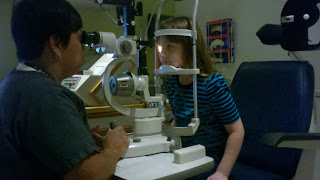 Not so good news from the 6 month check up

We've all had moments when life issues overwhelm us or make us feel scattered.  It's easy to become discouraged...depressed...or angry.  Today, I was feeling EVERYTHING!  I was ready to say "I QUIT!"  I truly felt that I had to be on some reality show, that was testing how far a person could be pushed, before completely losing it. (I was actually looking for hidden cameras)

My frustration level was interrupted on the drive home from the ER visit- where we learned that Brooklyn had broken her wrist.  A little voice from the back seat said, "Mama...How am I going to draw or color with my hand all wrapped up like this?"  So simple...But THAT was HER worry.  Here I was focusing on how overwhelmed I was that I had to be running around, to doctor after doctor....And my little girl was sitting their with her own worries.

So easy to get wrapped up in how life isn't fair, or the problems are too big...or too many.
Truth is....
LIFE-Isn't fair.   And the problems-CAN be too big, or too many.

THRIVING, doesn't mean you wear a cape and have super hero powers.  It doesn't mean you can't get angry - overwhelmed or frustrated--THRIVING means you recognize that you are human.  That life CAN get you down....Thriving is when you pick yourself up and keep going, even when it's hard...Even when things really stink...