Did You Kiss A Toad? 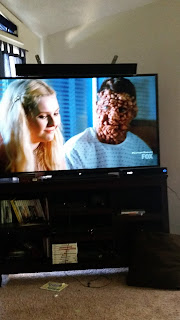 So, I have stayed relatively quiet here for the last few months.  But today, after hearing about this episode of Scream Queens, it spurred some inspiration.

Overall....I think the episode did what it set out to do.  (I am NOT saying it did a good job)

Aside from the ..."He looks like the inside of a hemorrhoid"....Or the continuous reference to this man as a "monster"...I was impressed with Scream Queens in how they showed the deep emotional struggles of what it's like living with Neurofibromatosis.

The scene in the diner, is what made me get up and open my computer to write this blog post.   I kept screaming at my tv, while watching....

Media...You are one of the most...If not THE MOST powerful tool in educating the public.  And when you blow it...Be prepared for the ultimate backlash.

You referred to the man in this episode as a MONSTER at least 7 times.   This is completely ignorant and mean.  It's no wonder - people with NF don't want to go out in public.

I am so sick of this bully mentality - People will never change...Especially when we are being shown how to react to people who are different.

BOILS?  WARTS?   NO!  These are NEUROFIBROMAS.  If you are going to represent a REAL DISORDER....Then REPRESENT REAL FACTS.  Don't mock it or make light of it.

While talking about your patient...You indicated how his life 'must be a mess'....and 'How could he ever find love'....

Seriously.  Well I wasn't a fan of your show anyway....And for SURE won't be tuning into any further shows now.

Let me also say this....At the end, when when our NF1 guy 'almost' gets the kiss....You were right...Looks don't matter...But the damage was already done, as you mocked, ridiculed and ultimately misrepresented THE MOST COMMON GENETIC DISORDER in human beings...

But, hey....You are all about Ratings.  Entertainment.  And MONEY.  What can we expect?

For now...I'm thanking you FOX...for getting me out of my Writers Block.