I Didn't Know There Was Anything Wrong With You. 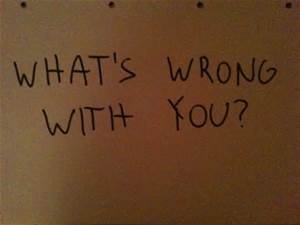 I was talking to my manager about my family, specifically why we have all these doctor visits that include MRI's, blood draws, vision checks....

I wasn't asking for time off for these appointments... but he was curious, because I talk a lot about being at the doctors with my kids..."Are they sick?" he asked me.

He is the same manager who found my keynote speech in the office, read it and spend some time googling me and Neurofibromatosis...So he was completely receptive.

But as I explained NF in more detail, he just looked more confused.

This rubbed me the wrong way. It didn't make me ANGRY, but it ANNOYED me enough that I took a few moments to responded to him...."Having NF doesn't mean there is anything WRONG with me.  It just makes me different.  I deal with things that you don't have to.....But at the same time...YOU deal with things that I don't have to deal with."
The old saying is 'we all have our crosses to bear'. For some people, the worst thing they deal with from day to day is getting cut off in traffic, or spilling coffee on their blouse. For others, it's a fender bender, or not enough money at the end of the month. For those with NF, our perspective tends to be broadened to include what the world might consider 'tornado-level' results - tumors, chemo, deformations, and more.
But people who don't have NF have their own stuff, and to them it can be just as bad. In some cases, it IS just as bad. In some cases, it's WORSE. Disease and Death touch us all.

But they can only succeed in doing that if we allow it - if we shrink into those compartments, instead of living the lives we deserve, and being the people we want to be.
NF is just PART of my life.  Yes, it intertwines with everything I do, and everything I am...Yet it isn't the thing that defines me.

Don't let it define YOU.