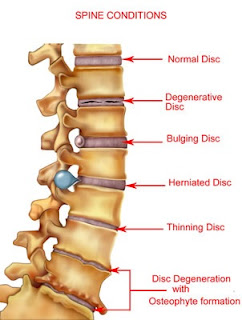 We were asked several times if Bailey had been in some kind of accident....Has she experienced any trauma to her back....If there could be ANY explanation for the condition the imaging showed.  There MUST be SOME explanation....Right?!  One would hope....

The doctor explained to me, that the imaging showed a severe form of 'degenerative disk disease'...and that if he had never met my 16 yr old daughter....He would have thought he was looking at an image of a 70+ yr old woman.  *nice--eh?  I think I've heard this from another Dr-->  Blog about the findings in MY MRI

So what is DDD?

The first thing I read, when I began researching this was that as a person ages, their body obviously begins to break down.   Spinal discs are soft discs that separate the interlocking bones (vertebrae) that make up the spine. The discs act as shock absorbers for the spine, allowing it to flex, bend, and twist. Degenerative disc disease can take place throughout the spine, but it most often occurs in the discs in the lower back (lumbar region) and the neck (cervical region).  Bailey's pain is in her lower back.

Web MD lists the following as to WHY DDD occurs-

Those with DDD, are typically very active, sport playing individuals who are older and have lived a full life of 'doing stuff'.  This does NOT describe Bailey at all.

This promted Bailey's doctor told us that Bailey's case is very rare.  *wow - if only I had a dollar every time we have heard the word "rare", when telling us about a new diagnosis.*

Sometimes-- there isn't a "WHY".  Sometimes, things just are what they are.

So what do we do?

We Thrive Anyway.  And continue to spread a message of hope.  We don't let another diagnosis stop us from living.